Back by popular demand…or perhaps because of a threatening email…today I’m posting the follow up from last week.

Rounding the screen, Paul swiftly walked to the end of the tub and leaned down to retrieve his clothes.

Paul’s hands instinctively flew to his privates and his head snapped up so fast he was left with a dizzy feeling—or maybe the dizzy feeling was caused by the sight in front of him, he wasn’t sure.

Not three feet away, standing by the fireplace was his nemesis, Liberty Banks; and she was holding his clothes—directly over the roaring fire.

They weren’t actually on fire. Yet. He considered that fortunate, indeed. “Would you kindly give me back my clothes?” Paul asked irritably, glancing down at his hands to make sure he was covered properly. She might have the illusion that he owed her the privilege of viewing his body because he’d seen hers. Unfortunately for her, he wasn’t in the mood to become a source of virgin entertainment.

Liberty laughed. “You don’t need to cover up. I already saw your…” She trailed off and sent a pointed look to where his hands were doing their best to shield at least part of his body from her view. She smiled up at him with a crooked smile. Her dull brown hair was coming loose from the hideous bun she always wore on the top of her head and a lock was falling into her face, partially covering one of her hazel eyes.

“Nonetheless,” he said stiffly, twisting his body to offer more protection from her gaze. “Your game is up. And unless you want to see it again, you’ll give me my clothes back.”

“Are you threatening me, Mr. Grimes?” Liberty asked archly, lowering her hand an inch and bringing his clothes that much closer to the flames. “It seems to me that I hold all the cards, or clothes, as the case may be.”

“Indeed.” Did she want to see him naked? A chill ran down his spine. There was only one way to find out. Turning back to face her, he said, “Well, if you’ve already seen it, and you’re still holding my clothes, then I guess you didn’t get a good enough look. Do you want another peek?” He took delight as her eyes widened when he moved one of his hands away, still leaving him somewhat covered.

Under normal circumstances, he’d never be so bold as to issue such a challenge or follow through with it, but his irritation with her, coupled with his strong desire to have his clothes back and be on his way, was impacting his brain and turning him into someone he didn’t recognize.

Outstretching his free hand, Paul asked, “May I please have my clothes back now, or do I need to remove my other hand and get them myself?”

“Why should I give you your clothes back?”

“Because now we’re even,” Paul snapped.

“We’re not even,” she responded sharply, her gaze at his waist, absorbing what was exposed to her curious eyes.

“No? Would you like to bathe me, is that it?” he countered, slowly reaching for the clothes she held hostage above the fire.

“No,” she snapped, her eyes flying to his. She took the small bundle of his clothes and brought them to her chest, wrapping both arms around them and clutching them tightly to her chest.

“All right; then give me back my clothes.” He reached out farther, attempting to grab them from her arms, but she was holding them with all her might and he knew that in order for him to get them back, he’d have to use both hands.

Liberty smiled at him again. If he weren’t so infuriated with her at the moment, he’d almost think she looked pretty. Of course nobody else, including Liberty, he’d bet, actually thought she was. She had plain brown hair combined with hazel eyes and a long nose. Her mouth was wide with slightly crooked teeth and she was nearly as thin as a scarecrow. Her looks would be considered plain at best, not pretty or ugly really, just plain. But when she smiled, it lit up her face and transformed it in a way that he found rather attractive. The trouble was, she barely ever smiled, and never specifically at him—until just now.

“You’ll get your clothes back when I’m satisfied I’ll never have to clap eyes on you again,” Liberty said tartly, still smiling.

“I agree,” Paul said heartily, more than happy to oblige her. “Give me my clothes and I’ll be gone in less than ten minutes.”
Liberty shook her head. “No, that’s not good enough. I need insurance. I need to know you’ll not be coming back into this house, or my presence, ever again.”

“And taking my clothes is going to accomplish that?” Paul could feel his irritation growing again. Why didn’t she just give them back to him already?

“Don’t worry, you’ll get them back—eventually,” Liberty said, scooting along the wall away from the fireplace and to the shadowed corner.

“Listen here,” Paul hissed. “If you think that you’re going to continue to hold my clothes while I stand here naked, you’re greatly mistaken. I’ll get my clothes back one way or the other; and if you don’t give them back of your own accord, you’ll wish you had.”

“How so?” she queried from the dark corner.

Paul slowly walked closer to her. He could hear the rustle of fabric and knew she was about to do something with his clothes. He just didn’t know what. “I’m not keeping myself covered because of my own modesty.”

“I’ve already told you that you could move your hands, I already saw your thing,” she said nonchalantly, a ripping noise following her words.

Paul didn’t believe her the first time she’d told him she’d seen his tool, and he certainly didn’t believe it when he moved his first hand and her eyes were drawn to his waist like a moth to a flame. But he’d had enough, and if he had to wrestle her to the ground naked in order to get his clothes back, so be it. Removing his other hand from his privates, he raced to the corner, bent on grabbing his clothes from her evil clutches.

Liberty squealed and ran in the opposite direction, causing him to nearly collide with the wall. Throwing caution—and pride—to the wind, Paul ran after her. He chased her around the furniture, going over the bed, around the wardrobe, behind the screen, around the tub, to the vanity, and back to the tub, knocking over the screen with a loud crash as they zipped by. Paul reached out and stopped her by taking hold of the loosened ribbon on the back of her gown.

“I’ve got you now,” he breathed in her ear, after he’d tugged her back to rest against his chest.

“No, you don’t,” she said, moving in such a way that made the ribbon he held slide through the loops, freeing her from his hold. She immediately scurried to resume her former position by the fireplace.

Paul looked down at his hand where the ribbon that had once been a bow on the back of her gown now lay across his palm in a wrinkled mess. Looking back up, he saw Liberty over by the fireplace with her gown in complete disarray. Most of the buttons going down the front were undone, showing the tops of her breasts and about three inches of her corset. There was a tear in her gown along the stitching of her sleeve and the skirts were crumpled beyond repair. Her hair, for the most part, had fallen down and looked to be in an awful tangle. There was no way she could look like that after briefly running around the room, could she?

Throwing the ribbon down to the floor in disgust, Paul stared at her. She had a blank expression on her face and her gaze was leveled on his waist. But he didn’t even care. He was beyond caring. “See something you like?” he teased, hoping to distract her, so he could grab his clothes.

Her face turned crimson and she pulled her eyes up to his face, not quite meeting his eyes. “Actually, no, I didn’t. I think I would’ve liked what I saw much better if that scar,” she pointed to a jagged scar he had on his left hip that ran from his hipbone to half an inch from another part of his anatomy, “went just a little farther over.”

“You’re a bloodthirsty one, aren’t you,” Paul said easily. Leave it to her to want him emasculated, as if this whole situation weren’t bad enough already.

“A shame I was not unmanned?” he asked in disbelief. “I think that part of my anatomy has suffered at your hands enough already, thank you.” What had he ever done to her to make her harbor this hatred for him?

“How did it happen?” she asked quietly, ignoring his remark.

Paul was in awe. Her voice had been so quiet it was hard to be certain, but he could have sworn her tone had held a hint of sympathy. “When I was twelve, my brother Sam and I found my uncle’s old fencing rapiers. Never having had a fencing lesson, we started wildly swinging them around at each other. Neither of us realized the protective tip wasn’t securely attached to Sam’s until, in one undisciplined swing, Sam’s tip flew off and his rapier cut me.” Paul saw her wince and added ruefully, “Although you’ve expressed disappointment that his rapier did not travel farther, I’m rather glad it stopped where it did.”

“I’m sorry for my earlier remark, it was most unkind of me,” Liberty said softly, still looking at his scar.

“It’s all right,” he assured her. Compared to all the other things she’d said or done, that was nothing. “May I have my clothes now?”

His words pulled Liberty out of her trance. Looking down at the clothes in her arms and her own gown, she bit her lip before she looked up and met his eyes again. “I…I…”

It didn’t matter what she was going to say or do next, because just then the door to his bedchamber swung open and was followed by a shriek of surprise.

Though Paul had his back to the door, he deduced who it was; and for further confirmation, he knew with certainty he’d guessed correctly when Liberty turned as white as chalk. 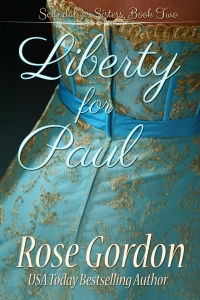